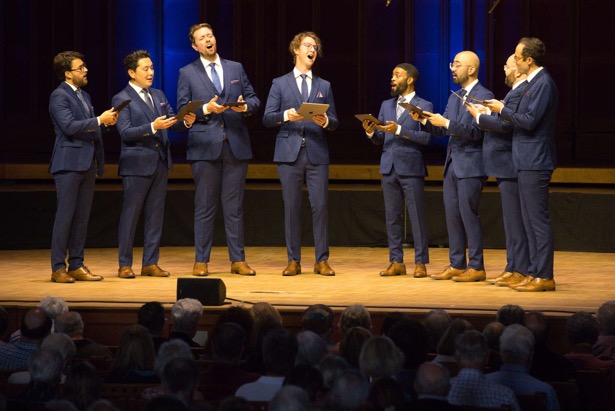 CONCERT REVIEW: Czech and American Music: Emerging from the Margins

At the end of the 19th century, Czech and American musicians began to question their marginal status in relation to the central German musical tradition (the three Bs, etc.) that dominated concert life. Although they did it individually, they also connected in ways that revealed a spiritual parallel. This was powerfully demonstrated in the Thursday night program at Ozawa Roomentitled “Prague paths“, the second of three such programs this summer organized by Emmanuel Hachethis one designed in consultation with the splendid male vocal octet, Cantus.

During the 1960s, American symphony orchestras and their conductors became interested in expanding their French-, German- and Russian-centric repertoires in new and imaginative ways. (There is a parallel to our post-BLM culture in which orchestras seek to expand their repertoire by “discovering” previous generations of black composers and commissioning new works from the current generation of composers with diverse and marginalized identities.) In the 1960s, two of the great “discoveries” were Leos Janacek (1854-1928) and Charles Ives (1874-1954), none of whose works had appeared regularly in the concerts of the great American orchestras. For example, before 1960, there had been only nine New York Philharmonic performances of Janacek in the 20th century, limited to his two most popular compositions, the Sinfonietta and the symphonic poem Taras Bulba. Thanks to Leonard Bernstein and with the help of central European conductors who already knew them, other works by Janacek were added to the repertoire, and they began to be heard more frequently. Likewise, with Charles Ives, only two works were performed by the Philharmonie before 1959, but since then his major works have appeared regularly.

Relative neglect is just one parallel between Janacek and Ives. Both composers also developed highly idiosyncratic styles that are now prized for their nonconformity and unique reworking of musical aesthetics: of the relationship between music and actual human existence. Both have been (falsely) accused of lacking skills and being uneducated. Both had their roots in the late Romantic style which is still clearly present in their early works; but even there, very individual traits began to emerge. (A similar situation is found in the music of Mussorgsky.) Janacek was lucky in his friendship with Antonin Dvorak who encouraged his young colleague to fully immerse himself in the previously marginalized Czech language and culture. The only older figure in Ives who offered advice and encouragement was his father George, who had very individual ideas about sound and music theory. Although Ives is not part of this program, his status as a “maverick” strongly resembles that of Janacek.

Cross-relationships between Czech and American music were established when Dvorak was brought to New York by a socialite Jeannette Thurber to found the National Conservatory (later the Juilliard School). Their tie was the subtitled “From the New World” symphony, which instantly attained classic status, gaining notice for its use of “native” material in a standard Germanic symphonic setting. American composers quickly responded with their own symphonies, including Amy Beach and then William L. Dawson, Florence Prizeand William Grant Again. Ives’s first symphony (his senior thesis at Yale) leans heavily on Dvorak’s model and composer Arthur Farwell was so influenced by Dvorak’s recommendation to use native materials that he founded a music publishing company called “Wah-Wan Press”.

The Tanglewood program centered around Dvorak, weaving a web of connections, including dark spirituals juxtaposed with parts of songs by Janacek and Dvorak. These works were designed to be performed for local communities in homes and churches, and are grounded in their home cultures, vividly portraying the spiritual – or soul – life of people and their daily concerns. . Two American composer-arrangers who worked with Dvorak as conservatory students were featured, one white and one black. William Arms Fisherman converted Dvorak’s Largo symphony into a (pseudo)spiritual, “Goin’ Home”, which was widely embraced (including making an appearance in the 1948 film “The Snakepit” where it was sung by Olivia de Havilland). Fisher then became head of the National Association of Music Teachers. Harry T. Burleigh grew up in the black church and sang spirituals to Dvorak during the composition of the symphony. He pursued a distinguished career as a composer of art songs, and somewhat later in life he began arranging spirituals for the concert stage in the form of solo songs with piano accompaniment (regularly performed by Roland Hayes, Paul Robsonand Marion Anderson), as well as parts of songs for a cappella choirs. Two of Burleigh’s wonderful arrangements, “Deep River” and “Ezekiel Saw the Wheel,” were on Thursday’s program. It must be said that such arrangements obscure what these spirituals may have looked like when they first appeared in daily slave life; this “polishing” process began as soon as they were introduced to the general public after the civil war.

Cantus interpreted all this repertoire with great polish, perfect intonation, tonal homogeneity and rich texture. Their performances were highly sensitive to mood shifts in words and harmonies, and individual solos were delivered with sonic beauty by various members of the ensemble. Their diction was clear enough for this non-Czech reviewer to easily follow the words of the printed program (despite the fact that many Czech words don’t sound like they appear on the page). Until the final set, their performances were a cappella. Although a certain similarity may settle for long a cappella presentations, this has never been the case here; singers avoided it with their vivid expressiveness and varied vocal colors.

Piano duties in the program were performed by Mackenzie-Melemed with Emanuel Ax lending an extra pair of hands (secondo) to seven Slavic dances and three selections “From a Bunch of Slavic Folksongs”, all by Dvorak. The piano duo milieu is inherently domestic, and the two pianists, teacher and former student, tore their parts together with the good humor of a home music festival. None of Dvorak’s “Slavic” music uses actual folk songs or dances; rather, it is shaped by an imaginative synthesis, the composer’s personal impressions of popular culture. When commissioned to set Moravian songs to music, he actually rejected the idea of ​​quoting actual folk music and setting the lyrics to his own “folk” music. By conveying the spirit rather than the letter, he was able to achieve his first major public success by performing the works of this program and others.

The most convincing piano work, and the only one intended specifically for the concert stage, was Janacek’s “1.X.1905, From the street…” performed by Melemed. It is often described as a piano sonata, but has never been so qualified by the composer. In fact, he was so ambivalent about this work that, in a fit of spite, he first threw the third movement into a stove before it was performed, then later (after one performance) threw the manuscript away. in a river. Fortunately, the pianist who had performed the piece kept her copy, which resurfaced and was published eighteen years later. Its ambivalence perhaps stems from the event depicted: this very touching work was written in response to the bayoneting by the police of a 20-year-old student protester named Frantisek Pavlik who demanded a university education in the Czech language in the city. of Brno which, like Czechoslovakia as a whole, was divided between German-speaking Bohemians and Czech-speaking Moravians. It took place in front of Beseda House, a Czech cultural center where Janacek was choirmaster, with the composer as an eyewitness to the event. The two surviving moves are labeled “Present” and “Dead”.

Tonal and in easily recognizable sonata form, this work nevertheless bears all the marks of Janacek’s unique voice. Although there are beautiful flowing melodies, the main form of continuity is provided by short figures compulsively repeated in literal or varied form, often separated by gaps. Each figure is expressive on its own, but the cumulative effect of repetitions can be overwhelming; some figures build a tension of defiance and others express forms of despair or a search for consolation. Janacek has a unique way of merging melody and accompaniment into a composite; the accents often contradict or problematize the written meter, resulting in unease and restlessness that seems a perfect mirror of the emotions attached to the event. It is tempting to try to place this style somewhere between Brahms and Schoenberg, but that is not enough at all; Janacek may have their intensity and originality, but he is nothing like them. Its harmonies are familiar, but the movements between them are original, even surprising, and can be extraordinarily beautiful.

It has been noticed that as a prolific and very important opera composer, Janacek tried to portray humans as they are rather than as they should be according to dramatic stereotypes. He himself was a flawed person, mysterious, passionate and, perhaps most importantly, incoherent. The only system he used to compose was the technique of transcribing the sounds of human speech into musical notation, which then forms the basis of his melodies. Scholar of Janacek, Michael Beckerman, wrote, “The only person who could inhabit the skin of both the brilliant amoral vixen and the withered old woodsman [from “The Cunning Little Vixen”]the glamorous but jaded Marty and the sadistic Prus [from “The Makropulos Affair”] is someone without the kind of basic personality promised by journalists and served up by his biographers. He goes on to say this of operas that one could also say of piano works: “they retain their power not because they are made ‘just so’, according to quantifiable laws, but because they are madly, fantastically, overloaded with irreconcilable images.” If that sounds chaotic, it’s the chaos we encounter when trying to make sense of the senselessness of everyday experience. Janacek responded to an experience (now) centenary of Brno in a way that can easily be transposed to our time and place without any sense of historical distance. Janacek’s expression of horror, outrage and grief speaks directly to today’s audiences, thanks to Melemed’s sensitive and eloquent performance.