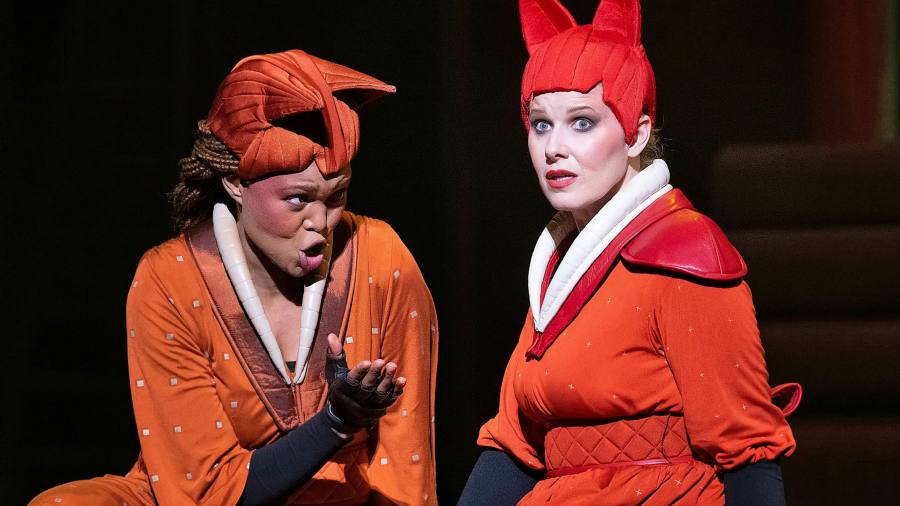 In living memory, the operas of Handel and Janacek were hardly seen from one year to the next. Now hardly a season goes by in a company without one or the other appearing, and often both.

Just over 60 years ago English National Opera gave the first English production of Janacek The cunning little vixen under former musical director Charles Mackerras, who made the company a leader in championing the Czech composer’s operas in the West.

Aside from the size of the Colosseum, which makes it difficult to transmit voices, Janacek is a good fit for ENO. This new production from director Jamie Manton offers a modern take on the opera with abstract settings and a huge cast of adults and children, playing humans, fox cubs, frogs, ladybugs (or were they mushrooms ?) and others in the middle of a colorful menagerie. It’s fun, touching, rarely twee (a danger with this opera) and probes the deep meaning of life without making big hits.

At the start, a large banner unfurls from the ceiling, tracing a cycle of life from the fetus to the midday sun of life until its brilliant sunset. Otherwise, the scene is bare except for moving scenery and piles of logs. Its appearance is a mess, but at least it leaves plenty of room for the young battalions of insects and animals to frolic in.

Into this teeming world of life comes Sally Matthews’ lively Vixen Sharp-Ears, embodying the life force of nature. She’s paired well with the creamy-singing Fox of Pumeza Matshikiza, and the authoritative, ruggedly-voiced Lester Lynch Forester delivers his latest anthem to nature with the necessary force.

Among the large cast, a number stand out, including Alan Oke’s exemplary schoolmaster (every word crystal clear), Ossian Huskinson as a young poacher, and Claire Barnett-Jones as an exuberant hound, wrapped in a huge ball of fur. Martyn Brabbins conducts a warm performance and it’s not entirely his fault that the singers sometimes struggle against the orchestra. This opera, and also its production, would be better suited to a small theater, but the energy of the community is uplifting.

At Opera North, Handel is the center of attention. As part of its spring tour, the company released its new production of Alcinehis magical opera about a witch and the lovers she holds captive, turned into animals and rocks.

With an eye on creating a smoother evening, this Alcine was heavily cut, and the production uses the film to transport the viewer to the witch’s tropical island. Director Tim Albery crafts a modern drama of intersecting love stories, but relationships rarely catch fire. Máire Flavin sings with authority, but with an unflattering tone like Alcina. Among the others, Mari Askvik and Nick Pritchard make the best impression vocally as Bradamante and Oronte, and bandleader Laurence Cummings keeps the beat going.

Production is said to be sustainable. There’s nothing new on stage, but the drama also has a lackluster sense of recycling.