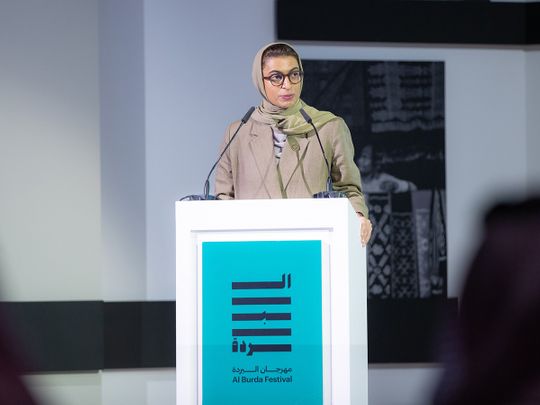 Dubai: Islamic art and culture is a powerful way to fight extremism, the Minister of Culture and Youth said at the opening of the Al Burda festival on Monday at Expo 2020 Dubai.

Noura bint Mohammed Al Kaabi was speaking at the opening ceremony of the Islamic arts festival at the Dubai Exhibition Center at Expo, organized under the patronage of Sheikh Abdullah bin Zayed Al Nahyan, Minister of Foreign Affairs and International Cooperation, and organized by the Ministry of Culture and Youth. under the theme “Transcending spaces, discovering the world”.

Al Kaabi said: â€œThe second edition of the Al Burda festival coincides with the Golden Jubilee of the United Arab Emirates. It is a celebration of Islamic creativity in all its manifestations and a platform for creators around the world. A space for them to advance Islamic arts and reach new heights of excellence in creativity.

She added that the festival’s slogan reflects â€œpluralism and eclecticism; it signifies spaces that have not yet been explored. It inspires critical intellectual discussion that takes the familiar into account and helps us reconsider dominant perceptions. It arouses in us feelings of curiosity to know what we don’t know and to help us change for the better â€.

As the UAE celebrates the 50th anniversary of the country’s founding, Al Kaabi said the country is more determined than ever to strengthen the role of arts and culture in global dialogue to promote tolerance.

The minister added that Islamic art and culture is a powerful means of combating extremist ideologies. â€œWe can use art to instill discipline and help connect generations and beliefs that would enrich our human experience. Art means different things to different people and manifests itself in different forms such as design, poetry, literature, food, technology, fashion, music, and advertising.

This year, the Al Burda Festival includes panel discussions, workshops and dialogue sessions, and participants will have the opportunity to learn more about Islamic arts and enjoy performances inspired by different cultures of the Islamic world. The festival also includes 15 exhibits of Islamic artwork, in addition to 10 live performances from around the world, including the Middle East, Asia and Africa.

The winners were announced at a gala on Sunday evening at the Dubai Exhibition Center.

The award ceremony was attended by Minister of State Sheikh Shakhboot Nahyan Al Nahyan, who honored the 30 award winners and took commemorative photos with them, alongside Al Kaabi.

Al Kaabi said the award received more than 1,557 nominees in a variety of Islamic arts, securing its position as one of the world’s leading events celebrating modern Islamic art and its creators.

Al Kaabi added that since its launch, the award aims to be a bridge to inspire cultural and artistic communication between people, which aims to illuminate the future by introducing authentic Islamic civilization, culture and arts through the story.

The closing performance was an Emirati “Malid” by Rashid Al Nuaimi and Saif Fathel.

The award was launched by the ministry in 2004 under the patronage of Sheikh Abdallah to commemorate the birthday of Prophet Mohammed (peace be upon him).

4 things to do this weekend