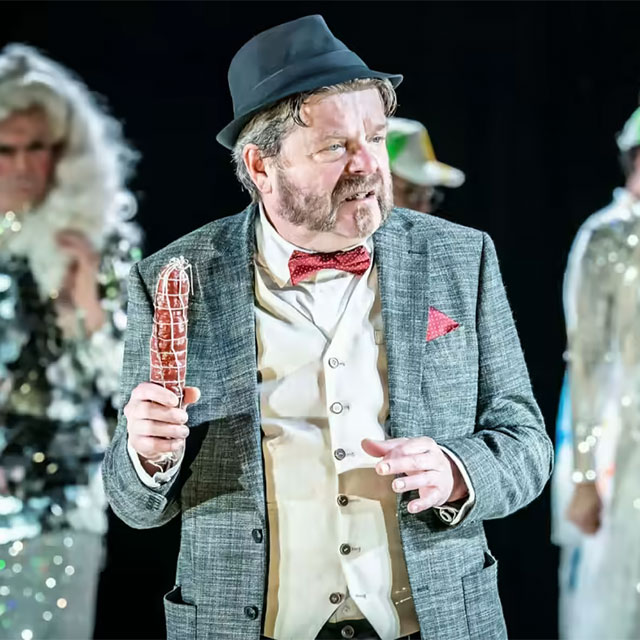 Too much ‘Art’ – not enough sausage.

So, even in communion, O Moon, tell me

Is constant love considered a lack of spirit?

Philip Sidney questioned the Moon in 1582, wondering if constancy was as despised there as on Earth – in 1920 Janáček and various librettists gave us a fantasy Moon where the “hero” escapes Earth’s frustrations to find this lunar life is just as frustrating as that of Prague. Wasfi Kani’s ‘Warning’ prepared the audience for the frankly bonkers activities in store, although the vastly different second half might prove a challenge for those unfamiliar with 15th-century Czech history, c that is, most of us. When David Pountney conducted the opera for English National Opera in 1992, the humor was softer and the staging more romantic, but this time around his unrestrained translation and production put it all in the spotlight.

Grange Park Opera focuses a lot on hiring the best singers for their parts, and here the stage was full of them. Mark Le Brocq excelled in several roles, his remarkably flexible tenor resonating gloriously in various characterizations, most notably as future romantic lover Mazal. It was a delight to see Clive Bayley, portraying dark old men more generally, frolicking around in a silver suit and sequined shoes and of course singing with his usual grace, and Andrew Shore’s bartender and privy counselor were both too superbly characterized as you would expect.

From zealous Christian martyr Theodora to blowing Sakristán girl here is quite a leap in two days, and Fflur Wyn convinced in both roles, as she did in her more serious second-half impersonations. Peter Hoare’s Brouček was an amiable rather than objectionable drunk, his singing as polished as his antics were (intentionally) chaotic. Adrian Thompson, who surely has the most diverse cameo roles in opera, made his usual significant mark in no less than four parts, that clear tenor as precise as ever. Anne-Marie Owens only had one role, but her stage presence and rich tones made her a special one.

Pasquale Orchard’s “Child Prodigy” managed to be charming rather than boring, and Jonathan Kennedy and Robin Horgan did much of the Postdatedcek and Spotcek roles. The chorus was outstanding, responding enthusiastically to the demands of the staging, and the five dancers were outstanding; in fact, Lynne Hockney’s choreography was one of the evening’s delights.

To say Leslie Travers’ designs and Marie-Jean Lecca’s costumes were wonderfully outrageous seems an understatement; from moon-affected aesthetes to somber “walking statues” of city dignitaries, everything exploded with vibrant color and life, aided by the dismal quality of Tim Mitchell’s lighting. The BBC Concert Orchestra under George Jackson brought out all this dynamism, sparkling with energy in the first act and sympathetically shaping Janáček’s glorious melodies in the second. Even if you don’t care much about the “wacky” quality of the tale, you can certainly savor all the tastes of Káťa Kabanova and The cunning little vixen that float through the music.

Few spectators escape light censorship in this opera; wealthy patrons, corporate sponsors and affected aesthetes are particular targets, as are music critics, but this one was happy to take it in good spirits in such an entertaining presentation.

• Ddetails of future performance can be found here.