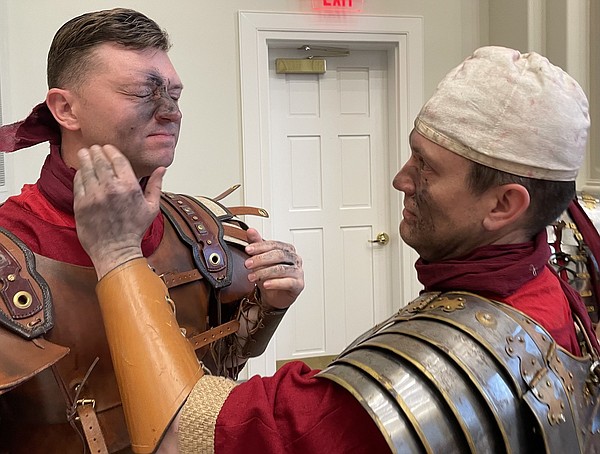 Logan Ellis, one of the actors playing Jesus, was supposed to ride a mule named Ralph through the sanctuary of the First Pentecostal Church in North Little Rock.

But Ralph got stage fright on Monday and refused to budge, so he was replaced by Sam, a more docile workhorse.

When audiences gather for ‘I Am’, the congregation’s Easter drama, they will see a donkey, two doves, three camels and 300 costumed actors, re-enacting Gospel stories of life, death and resurrection of Jesus, church officials said. .

The play, which opened on Friday, is scheduled to be performed nine more times by Easter Sunday.

By midweek, more than 7,000 seats had been purchased, church officials said.

At a recent dress rehearsal, the singers hit the treble and the actors remembered their lines.

The recorded narration was impeccable, brainy and British. The Sea of ​​Galilee shimmered on a gigantic high-definition screen.

When it was time for Christ to feed the multitudes, about 500 fake fish emerged from a dozen wicker baskets, propelled by a concealed mechanical device that has been dubbed “the Fishinator”.

The kids on stage eagerly picked them up.

Most of the time, the night had gone well.

The cross felt heavy and the blood looked real. The “hosannas” reached a crescendo on Palm Sunday to be replaced by the Good Friday refrain – “Crucify him”.

On at least one occasion, the cast was encouraged to keep their cell phones out of sight and reminded to remain seated while the Fishinator unloads seafood.

Otherwise, the audience will not be able to see the special effects.

Overall, the atmosphere was good.

“You did a phenomenal job,” Pastor Nathan Holmes told the cast and crew. “We’re almost there. We’re so close.”

The few glitches that were evident Monday night had been resolved by Tuesday’s repeat, organizers said.

“I think all those little issues are resolved,” said Zach Ward, director of communications for the congregation.

Perhaps most importantly, the Jesus Rig Enhanced Ascension went off without a hitch.

Much of the play is taken directly from the New Testament. The Gospel of John is the main source, although Matthew’s account is also important.

The London-trained narrator reads the King James Version, which dates from 1611.

The script is based on the standard English version, published in 2001.

A choir of 50 voices provides the punctuation.

It takes a legion of volunteers to make the play successful.

“There are 300 people here in suits, but there are double or triple the support staff,” Ward said. “There is an army behind the scenes.”

On Monday, few people stayed busier than DeAnn Whitfield, the drama’s head seamstress. She showed up before sunrise to make more costumes. With the sunset approaching, she was still working hard.

Whitfield has made hundreds of costumes for Easter dramas over the years and enjoys seeing them worn on stage.

“It still touches me every time I see it. It’s so moving – the life and death of Jesus,” she said.

Inside, Pharisees and peasants dress while, in a corner, Roman soldiers dress.

The rehearsal, which ran from around 8 to 10 p.m., was followed by a brief recording session featuring Justin Brewer as Pontius Pilate.

“I am innocent of that man’s blood,” the actor repeated over and over, alternating speed so the producer had more than one option before adding it to the track.

Much of the music was written by members of the congregation.

In addition to the underscore, keyboardists, guitarists and bass players as well as a drummer perform live.

The First Pentecostal Church has had a massive Easter drama periodically for years, most recently in 2018.

“We were all settled and ready to go in 2020, and about that March [or] April, everything in the world kind of fell apart,” Ward said.

The stage, already built, had to be dismantled. Accessories had to be put away; the fake fish put aside.

Two years later, with covid-19 waning and pandemic restrictions eased, actors and singers are ready to break a leg.

This year, two people play Jesus, making sure they get some rest between performances.

“Roman soldiers sometimes get carried away by beating you. With the amount of training and performance, it’s good to have two people playing,” he said.

When Ellis isn’t the one carrying the cross, Ashland Bourn will have the starring role.

During Monday’s rehearsal, Caesar’s henchmen performed their roles with enthusiasm, exchanging at least one high-five amid the onslaught.

In previous years, Ellis says he functioned, essentially, as the Messiah’s personal assistant.

“I helped clean him, get him down from the cross, make sure the blood flowed, make sure he got into the grave. So it’s kind of unique to play to Jesus now,” he said.

The piece lasts about 1h45.

There were a lot of lines to learn, he said.

“You know, it’s really humbling to be able to portray the life of Jesus. We don’t take it lightly,” he said.

“Myself and the other man playing Jesus, we spent a lot of time praying and fasting because we want it to be as powerful as possible,” he said.

If you are going to …

Outside First Pentecostal Church in North Little Rock, young performers of the congregation’s Easter drama stopped by Monday to pet two of their camel co-stars, Country Boy and Cowboy. The play “I Am” started on Friday and will be played between now and Easter. (Arkansas Democrat-Gazette/Frank E. Lockwood) 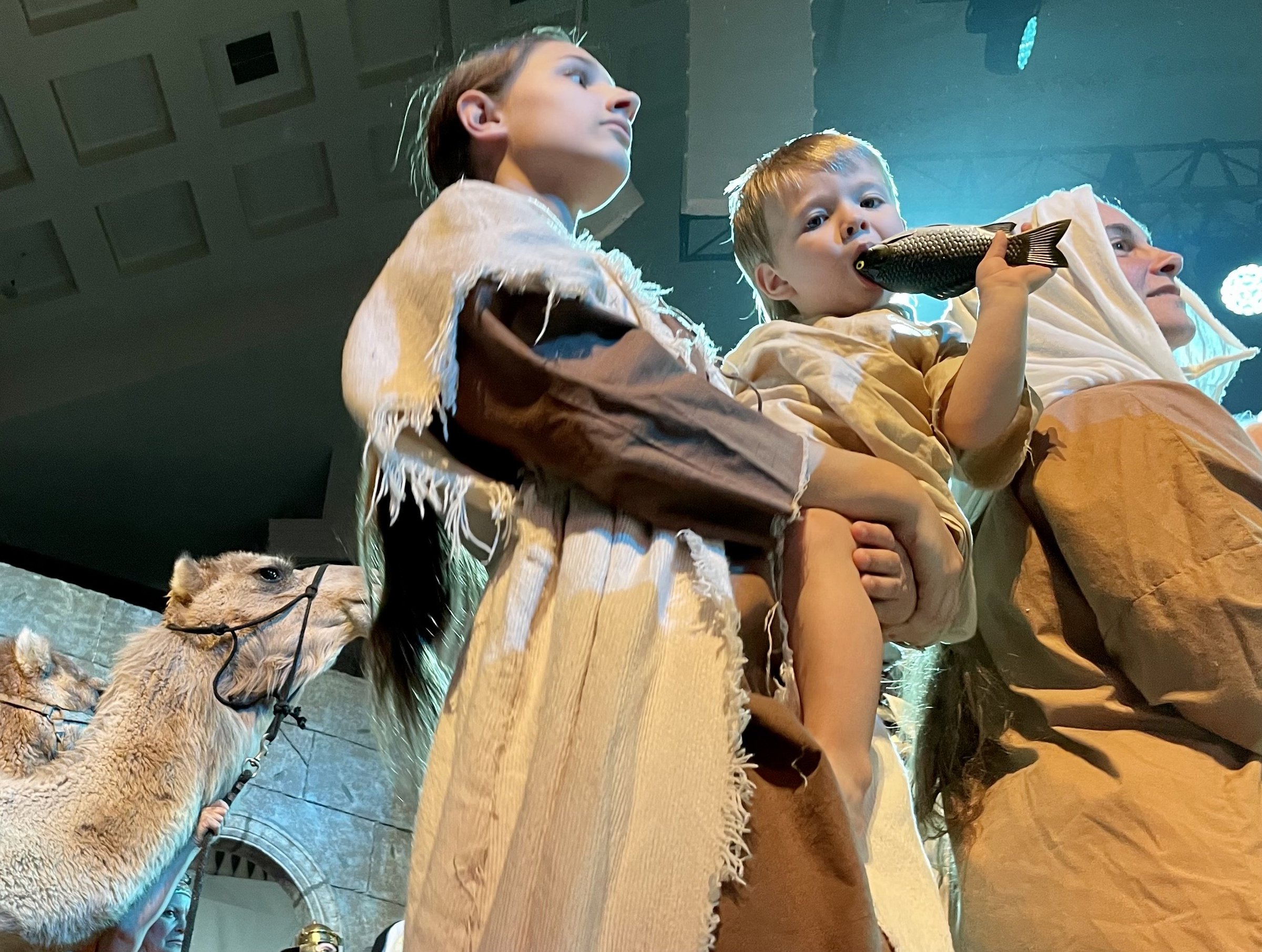 Ollis Townley, held by Braiden Shemwell, chews on a fake fish during Monday’s dress rehearsal for “I Am,” an Easter drama staged by First Pentecostal Church in North Little Rock. Over 300 costumed figures help portray the life, death and resurrection of Jesus. (Arkansas Democrat-Gazette/Frank E. Lockwood)

Olivia Rodrigo to Jon Batiste, check out the full list of winners