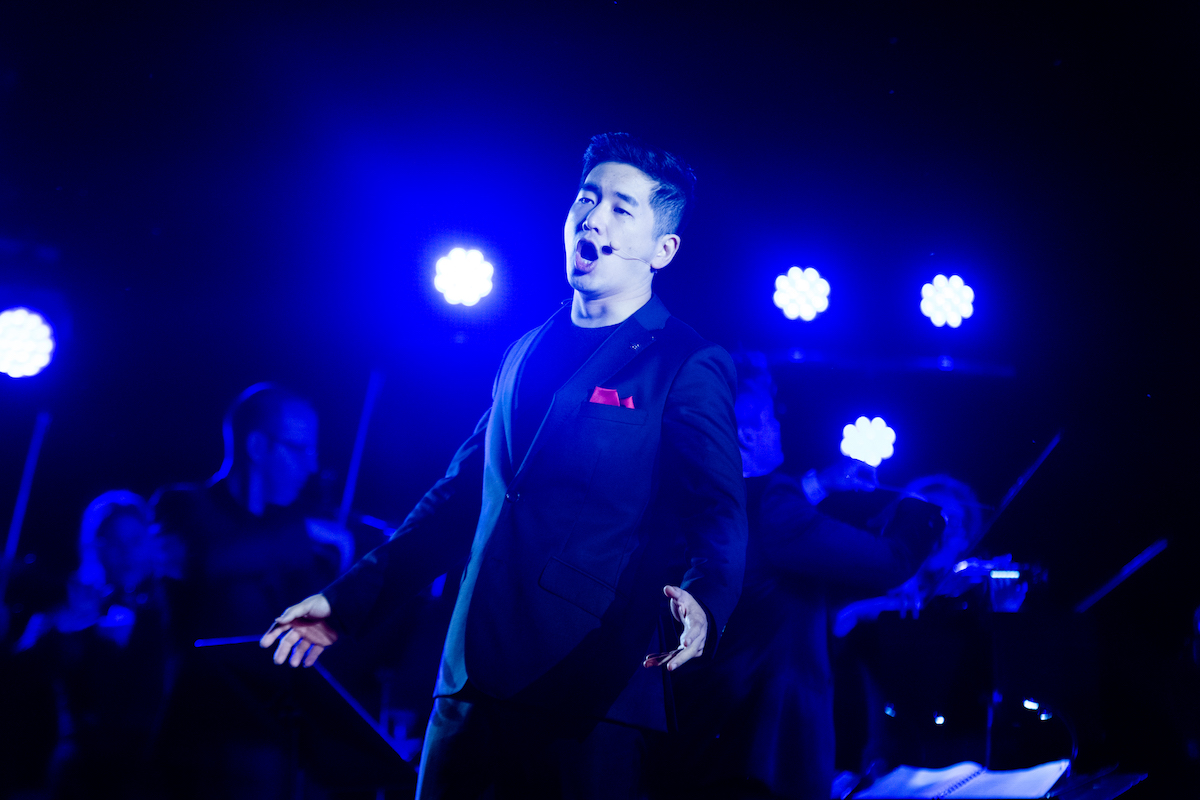 The Festival of Outback Opera is back for a second year and if the public’s enthusiasm is there, it is on its way to becoming a staple of the international opera calendar. Outdoor opera presentations are nothing new, here or abroad. Whether it’s country house opera festivals like Glyndebourne and Grange Park in the UK, the more recent Bayreuth Festspiel Open Air in Germany, or outdoor concerts in places like Broome and Jimbour in Australia, audiences have been enjoying beautiful music from the comfort of their picnic blankets, one-pieces and lawn chairs for years. What can we then add by removing it as much as possible from human civilization?

The answer is a lot. Freed from the distractions of the built environment, the music comes to the fore, unaltered by the trappings of opera houses and country estates. The setting is more decortic than decorative, art and nature coming together in perfect synthesis.

The festival was already in full swing when Opera Queensland invited limelight to attend his two flagship concerts in Winton and Longreach on May 21 and 22. Aboard the chartered Alliance Airlines flight to Brisbane, it was impossible to be fully prepared for the majesty of the Australian Outback. Seen from above, the desert landscape had been transformed by recent rains into a verdant plain that stretched in all directions as far as the eye could see. This rare spectacle was about to be made even more extraordinary by the arrival of Opera Queensland.

With a population of just 954, Winton is firmly woven into the fabric of this country’s history and folklore. Founded in 1918, the city’s Royal Theater is one of only two open-air cinemas still in operation in Australia. On May 19, he welcomed the new order of Sarah Holland-Batt The Sopranoswho is on tour as part of the festival.

The nearby North Gregory Hotel was home for the night, with its beautifully restored Art Deco facade dominating the main street. The hotel management were delighted to welcome back Opera Queensland and reportedly sold four times more meals than usual during the festival. Sing Sing Sing Event. Led by Jason Barry-Smith, the single was built around Waltzing Matildawhich was first performed at the hotel in 1895.

The nearby Waltzing Matilda Center houses an immersive song exhibit and is a must-see for anyone visiting Winton. Designed by COX Architecture, the museum’s striking exterior mirrors the contours of the jump-up that rises to the southeast, 75 meters above the city. Home to Australia’s Age of Dinosaurs and its Titanosaur Walk exhibit of fossilized sauropod footprints, this 98 million-year-old mesa was also the location of Opera Queensland’s Friday night performance.

Against a breathtaking indigo sunset, Dark Sky Serenade was the first of two concerts organized by Dane Lam, musical director and conductor of the festival. Lam also acted as MC, presenting each work in a wonderfully disarming way before taking the audience deeper and deeper on a portable journey into the world of music.

Originally slated to headline the festival, Greta Bradman was sadly indisposed and soprano Eva Kong saved the day by rushing into the breach with barely a moment’s notice. Kong is awesome range was fully utilized in a program that showed off its beautiful coloratura and powerful low register. She delivered two beautiful solos – Nome Caro from Verdi Rigoletto and Casta Diva from Bellini norma – before joining Wang in a heartfelt O soave fanciulla from Bohemian.

They were joined on stage by Shaun Brown, Emma Nightingale, Hayley Sugars and Ashlyn Tymms, who performed a number of works including selections from Mozart Cosi fan Tutte and Rossini The Barber of Seville.

One of the many highlights of the evening was Brown’s rendition of Deh! come go finestra from Don Giovanniduring which Adam Chalabi performed the mandolin solo on the violin.

Marcus Corowa skillfully switched between contemporary and classic styles, performing his own song water and air on guitar, before joining Emma Nightingale and the whole company in Lehár’s Waltz Duet The Merry Widow.

As the ecstatic audience descended from the set and returned to Winton, the evening ended at the Colonial Tattersalls Hotel, where the cast, musicians and crew took one last bite to eat with locals and visitors before that calm envelops the city.

The following day, the festival traveled 179 kilometers to Longreach, with its spectacular collection of vintage aircraft at the Qantas Founders Museum and the postmodernist Stockman’s Hall of Fame offering visitors plenty to see and do between festival events. Just outside of town, the 18,000-acre Camden Park station provided a suitable pastoral setting for the second concert titled Sing in the night. In stark contrast to the aerial views offered at the previous night’s concert on the jump-up, this ground-level location immersed the audience in the visceral pleasures of the earth, as they weaved their way through the tall grass surrounding the stage. 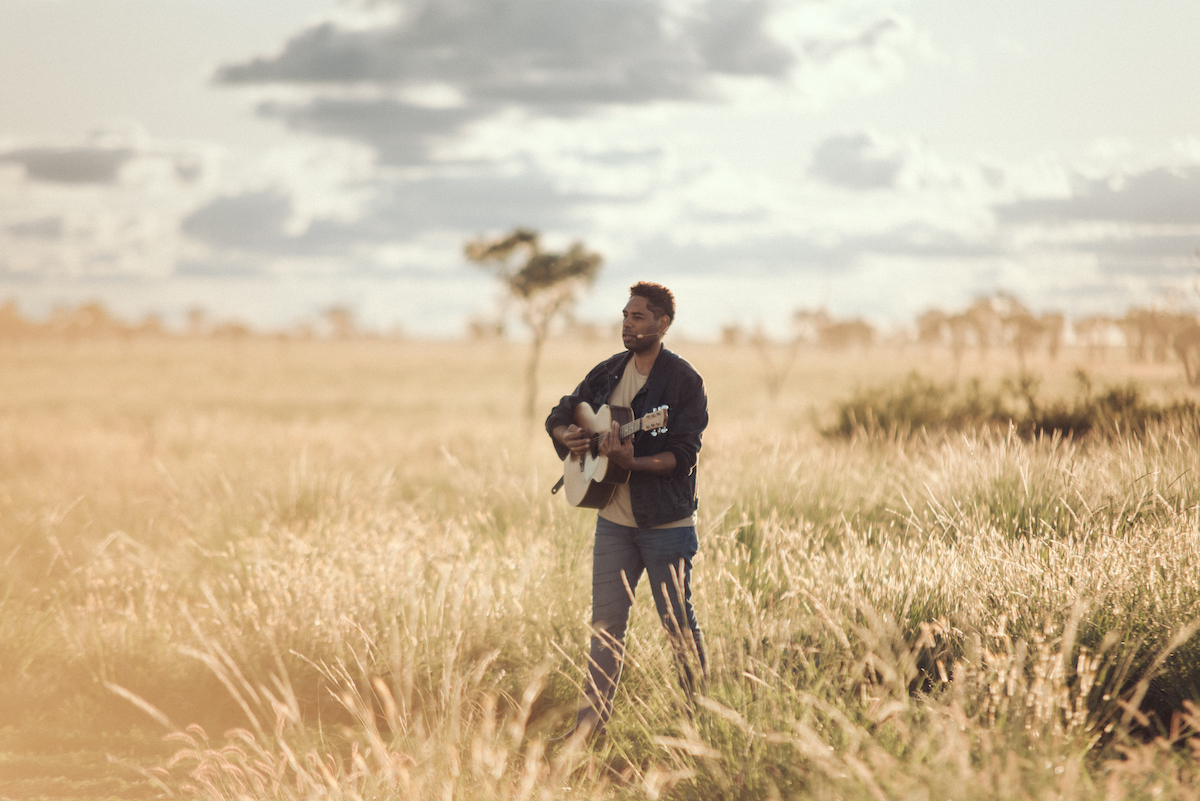 While the line-up of performers was the same, Lam put together a very different program of works that celebrated the wonders of nature. It opened with Fall from Vivaldi Four Seasonsbefore that of Henry Mancini River of the Moon followed by a glorious rendition by Kong of Měsíčku na nebi hlubokém from Dvořák Rusalka. Kong deserves praise not only for learning the tune in less than a week, but also for mastering the practically impossible Czech lyrics.

Other highlights of the evening included Tymms’ rendition of My heart opens to your voice from Samson and Delilah by Saint-Saens, Sucres’ Umbra mai fu by Handel Xerxesand Nightingale Summer time from Gershwin Porgy and Bess. The eclectic program also saw Corowa perform another of his own songs – Infused Soul Sunny Days – before Brown delivers a rousing rendition of Arlen’s setting of Overflow Clancy by Banjo Paterson.

The intermission featured an orchestral arrangement of There’s no mountain high enough in the style of Monteverdi, developed as part of Opera Queensland Songs of love and war project with the University of Queensland School of Music.

Also presented in association with the university, concerts Dark Sky Serenade and Sing in the night were accompanied by the superb UQ Pulse Chamber Orchestra, conducted by violinist Adam Chalabi and cellist Patrick Murphy. Both achieved levels of virtuosity normally reserved for the world’s greatest recital halls. Much of the program was arranged by Opera Queensland’s head of music, Narelle French, who also played keyboards at both concerts. Infusing many pieces originally written for larger forces with the sound of a romantic piano concerto, French’s arrangements created a sense of intimacy in the boundless Outback that was more akin to the Salon du Nineteenth century. To this end, French was ably aided by sound designer Geoff McGahan, and the effect was that of a warm, protective embrace in the endless night.

Lamb said limelight“Working with the UQ Pulse Chamber Orchestra and Narelle French in this craziest and most atmospheric setting was simply inspiring. All the musicians, the singers, everyone – we transcended ourselves by sharing this timeless music in a so old place.

Having reached such artistic heights, both concerts ended with Wang leading the company in a driving chorus of Funiculì, Funiculàduring which the enthusiastic public joined us. Sing Sing Sing programmes, this kind of involvement is an integral part of Opera Queensland’s wider mission to bring music closer to as many people as possible. One way to do this is through its schools’ engagement programme, which included the 2018 Composed in Queensland initiative. To date, Opera Queensland has reached some 400 students in 13 schools. For many, this is often their first exposure to music education, and the importance of such awareness cannot be overstated. 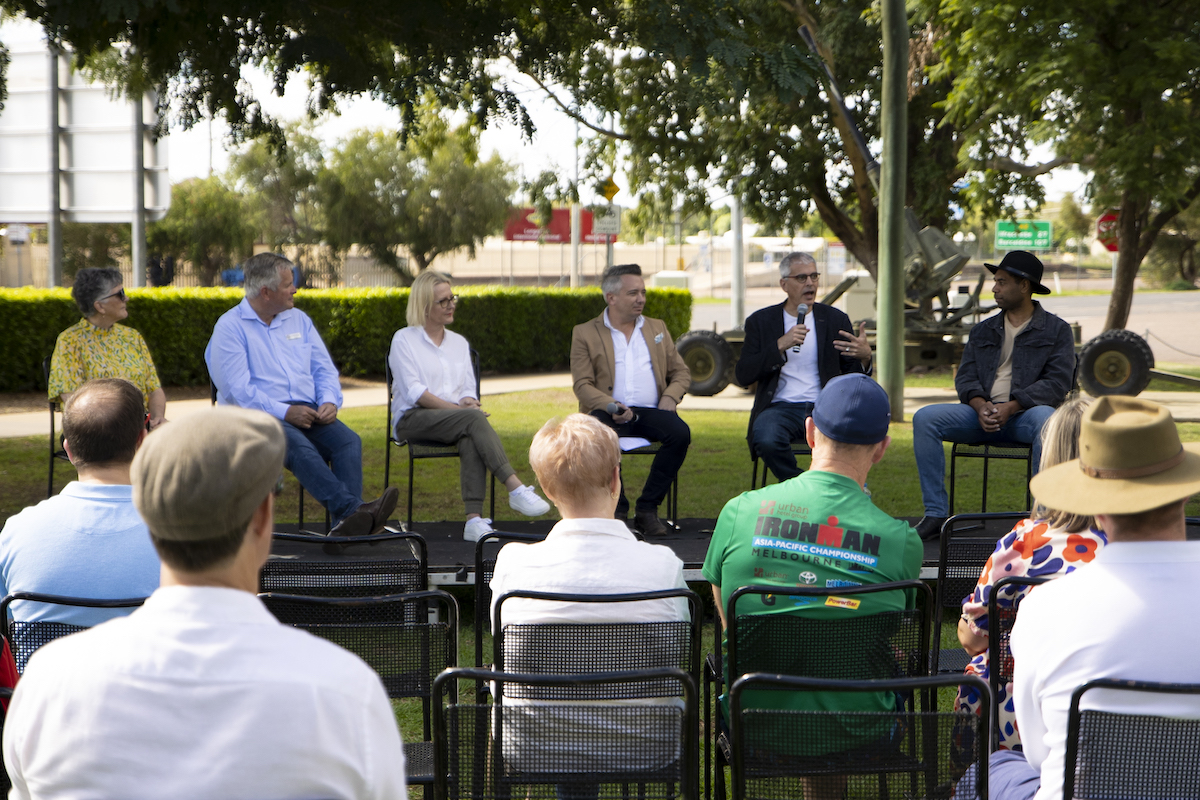 Who Cares About the Arts in the Regions?, a panel discussion at Opera Queensland’s Festival of Outback Opera, 2022. Photo © Jade Ferguson © Visual Poets Society

The transformative power of music and the arts was a key topic during the roundtable Who cares about the arts in the regions? held on May 22 at Edkins Memorial Park, Longreach. Speakers included Patrick Nolan, CEO and Artistic Director of Opera Queensland; Mark Taylor, Director of Regional and Community Learning at Opera Queensland; and artist Marcus Corowa. They were joined by Kirsten Herring, of Arts Queensland, Mayor of Longreach, Tony Rayner, and Louise Campbell, CEO of Red Ridge Interior – a mid-west Queensland non-profit organization that promotes and preserves community through through cultural activities and creative enterprises.

During the discussion, it was repeatedly recognized that meaningful and lasting projects were essential to improving career paths in the arts. Nolan stressed the need for touring initiatives to be accompanied by local organizations, which are currently being created. Corowa added that it was crucial to engage with First Nations people. The health benefits of singing were also discussed, with Mayor Rayner making a direct link between arts participation and a city’s quality of life. Fortunately, further community engagement is made possible through support from the Tim Fairfax Family Foundation, as well as the Queensland Government, which supports the festival through Arts Queensland.

Opera Queensland’s Festival of Outback Opera is an extraordinary achievement in improving accessibility to opera and the arts in general. Only the countless stars in the night sky could rate this stellar event and its lasting impact on the lives it touches high enough. Nolan hopes it will soon attract international artists and visitors to the area. Judging by the reaction of those present this year, his wish may well come true. It certainly deserves it.

Jansson J. Antmann visited the Festival of Outback Opera as a guest of Opera Queensland.