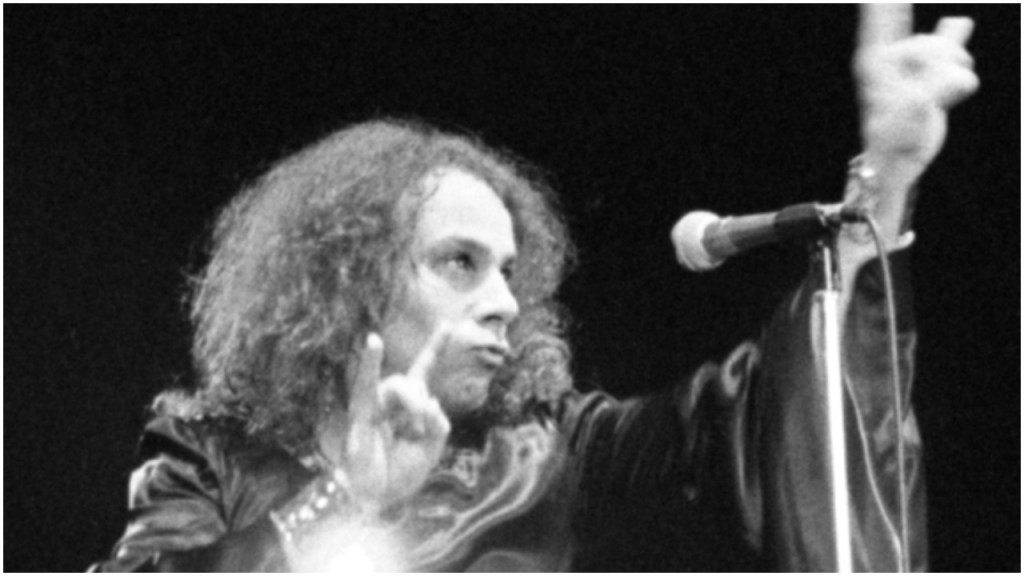 Ronnie James Dio, the man single-handedly responsible for creating horns of metal, has sold over 50 million albums and fronted some of the biggest heavy metal bands in the world, including Rainbow and Black Sabbath.

Although he’s often on lists of the greatest heavy metal singers, because he wasn’t known for his loud demeanor like many of his peers – there were no cocaine fits, wild striptease or never landed in jail – his story was somewhat overlooked.

Argott told Deadline that the singer doesn’t have the “archetypical” rock n roll story. “He basically had three incredible careers that, frankly, any artist would be lucky enough to have one of those careers. From a storytelling perspective, we looked at how to tell that story and not give the feel like it’s the same story over and over again. The story presents its own set of challenges that you have to overcome. It’s kind of refreshing not to be the typical Behind the Music documentary, by the numbers, where everything is quite expected,” he added.

Fenton added: “It’s a story that I feel like we just need right now, it’s so beautiful that you look at this heavy metal dude and you think you know the story full of darkness, but it is truly a story of righteousness and perseverance and packed into this interesting world.

Dio, who died in 2010, began life as a crooner in the 1950s as a member of the Vegas Kings. At the end of the 60s, he formed Elf then he joined Rainbow with Deep Purple guitarist Ritchie Blackmore, before replacing Ozzy Osbourne in Black Sabbath in 1979 and then forming his own group Dio, which would sell more than 20 million albums. .

The pair said Dio was basically a Heavy Metal Mr. Rogers. However, instead of wearing a sweater and teaching kids with puppets, he battles 30-foot-tall animatronic dragons on stage.

The pair used stock photos and VHS music videos to piece together Dio’s story — as if they were metalheads hijacking the high school’s audiovisual room — along with handwritten messages. The film also features a range of talking heads, including Dio superfan Jack Black, former band members such as Tony Iommi and Geezer Butler, Rob Halford, Lita Ford of the Runaways, and author Mick Wall.

Argott and Fenton are the perfect duo to take on the movie. They are metalheads who have cornered the market for interesting documentary stories in the genre, having made films such as Last days herethe story of Pentagram singer Bobby Liebling and his attempts to overcome drug addiction, and As palaces burna crazy film about Lamb of God singer Randy Blythe, who is arrested for manslaughter in the Czech Republic following a fatal incident involving a fan at a concert.

So you can imagine they were interested when they got a note from BMG Films head Kathy Rivkin Daum who had seen their film Believerasking if they would like to talk about a doc Dio.

“Kathy had presented us with a few projects, and they were cool, but none of them were ready to go. Then I got an email late on a Friday and the subject was Dio. Any interest? I thought, ‘Holy shit’. It was the perfect email at the perfect time for the perfect people,” says Argott.

Afterwards, the couple met Dio’s widow, Wendy, who oversees Dio’s estate. “Clearly to make a documentary about Dio you have to have her blessing because she controls Ronnie’s legacy and that’s very important to her. But BMG and Wendy were indifferent to the point where we did the whole movie. and they didn’t really see a frame,” says Argott.

The couple then flew to Los Angeles to screen the film and, on the way to the screening room, bought a box of tissues as they knew it might bring some tears.

The film’s ending brings a few tears to even its toughest metal contributors. But it also frames Dio’s legacy in a new light. “The only people who don’t like Ronnie is because they haven’t met him,” Argott says. “My mom knows about Ozzy, but she doesn’t know about Ronnie yet.”

Underwater is selling to SXSW and the hope is that with the boom in music documentaries, especially on streaming services, it will find a good home. “I’m confident he will find a home. But it’s always nerve-wracking as a filmmaker. We’ve been doing it for a long time, but you always have to be invited to the dance,” says Argott.

Dio: dreamers never die is directed by Don Argott and Demian Fenton and produced by Argott and Sheena M. Joyce. Wendy Dio and Kathy Rivkin Daum are executive producers. It will premiere at SXSW on March 17 at 4 p.m. CT.

LOANS FOR PERSONS IN NEED OF BAD CREDIT SCORES