More and more young Sarawakans have taken advantage of the many months spent at home during the pandemic as an opportunity to learn and learn about traditional instruments.

Sharkawi Amit, Managing Director of the Sarawak Arts Council, thinks it is â€œcoolâ€ that more young Sarawakans have turned to online platforms to improve their knowledge of traditional music.

â€œDuring the Covid-19 pandemic, young people were interested in learning traditional instruments to occupy their time during periods of stay at home. We have seen an increase in online music lessons among young people, â€Sharkawi said in an email interview from Kuching.

Once Malaysia achieves collective immunity, SAC intends to organize more musical events to promote the arts and state heritage. Sharkawi aims to bring the uniqueness of Sarawak to the world.

â€œNext year we have activities planned for those interested in traditional music. The first step is our Negeri Sarawak Traditional Orchestra campaign which is presented to young people. Our goal is to attract more young people to learn more about the different types of Borneo music, â€he said.

Hailed as Sarawak’s most famous instrument, the sape is made from a wooden barrel. The lute – which measures between 76.2 cm and 121 cm – is traditionally played by the Kenyah and Kayan tribes. This cordophone instrument has a few strings (some have three, four, six or even eight) where one string is always for the melody and the others for the bass.

This carved drum is used by the Iban community in ceremonies like Hari Gawai and other festivals.

This membranophone drum is made of perforated wood lengthwise. The surface of the drum is covered with goatskin (or deer and other livestock). The instrument is played with the palms of the hand and is often played in pairs.

This wooden xylophone consists of 10 or 11 kerutong (bars), tied on a string and tied to a block of wood. Each kerutong is struck with a wooden mallet to produce a pleasant hollow sound. It is one of the most popular musical instruments in the Orang Ulu community.

Also known as the keringot, this five-hole nasal flute is one of the instruments of the Kayan community. Selingut is made from bamboo, and it is played by passing air through it through the nose.

The nasal flute is played by circulating air through the nose.

Made in bronze, the engkerumong consists of a set of small gongs arranged on a horizontal rack. This instrument is often played during Hari Gawai or other festivals by Iban women. 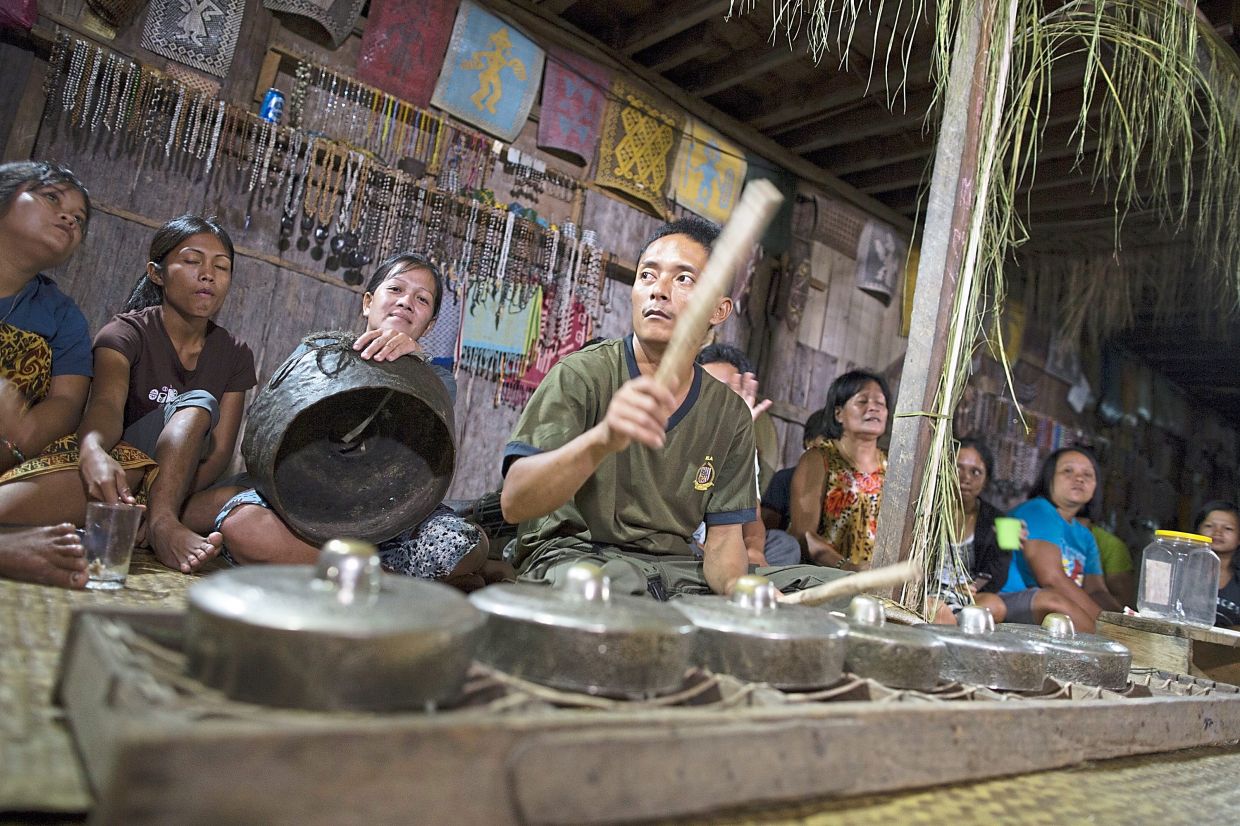 The engkerumung is made of bronze and is performed at special festivals.