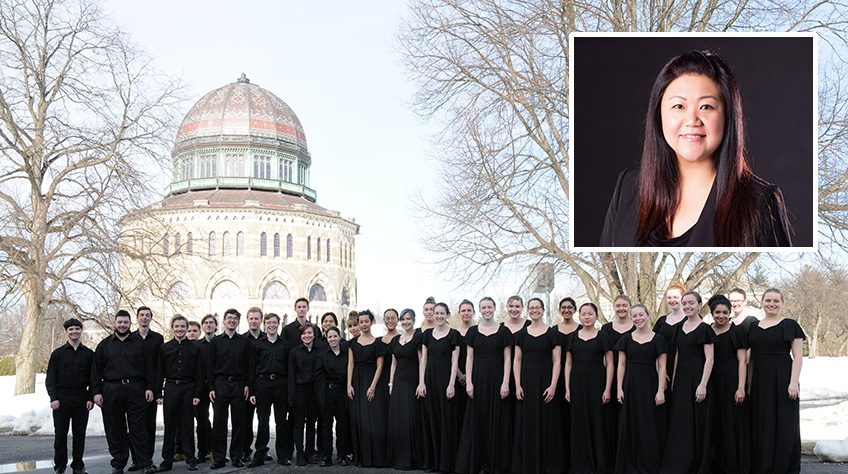 Every budding musician has heard the question, “How do you get to Carnegie Hall?”

This is what the Union College Choir has done over the past year and its efforts will be rewarded.

On Sunday, March 20, the 31-voice choir will sing at Zankel Hall, the 599-seat theater that is the midsize venue at Carnegie Hall in New York that includes the larger Stern Auditorium and smaller Weill Recital Hall. (Meanwhile, the Union College Choir and Orchestra will perform their Winter Concert on Sunday, March 13 at 2 p.m. in the campus Memorial Chapel. It’s free and open to the public.)

Carnegie’s performance is the inspiration of the choir’s director, Shou Ping Liu.

“I knew we had to do something,” she said. “We were in low spirits.

A bit of history: When Liu joined the college faculty as a lecturer and choir director in 2017, she said the prevailing attitude seemed to be that it was more of a recreational group. This despite the fact that a choir had been part of the culture of the college since the mid-19th century and had not only sung at the White House in 1978 at President Jimmy Carter’s first state dinner, but had toured the Venezuela, England, Germany, Austria and Canada. .

But this fall of 2017, Liu only got four people to sign up in the first week. After a lot of effort, she said, 24 other people joined but the attitude was still very “nonchalant”.

“I wanted to create goals and do it well,” Liu said.

She knew discipline was key. Originally from Taiwan, Liu had studied piano at the New England Conservatory. During his graduate years, his interests turned to choral and orchestral conducting, which led to apprenticeships and workshops with conductors such as Marin Alsop, then musical director of the Baltimore Symphony Orchestra. She also pursued graduate studies in orchestral conducting at a school in Berlin, Germany, and later earned a doctorate from the University of Southern California.

While his education was entirely music-based, Liu knew that college students were mostly future engineers.

“So five years ago I took anyone, whether they could read music or not,” she said.

One of them is Nguyen Nguyen, currently a junior majoring in economics/mathematics.

“I’m from Vietnam and I had never heard of Bach or Vivaldi or classical music,” she said. “I didn’t know anything about what a choir was – we don’t have one and I’m not a Christian so I don’t know about churches – or why I was singing this music.”

But that first week as a freshman and new to this country and looking for ways to meet people and maybe have fun, she sang for Liu.

“I was amazed that she took me and said I was an alto. But I didn’t know what a soprano or an alto was,” she laughed. “I haven’t read the music.”

Not a problem as far as Liu is concerned. She said she believed that as long as Nguyen was around someone who could read music, she would learn when to “move.” That’s what happened.

“I tried to follow what everyone was singing and I’m better now,” Nguyen said. “But I still can’t read the music.”

Nor 50% of the other singers in the choir.

“But it’s so beautiful to be inclusive and to be here at Schenectady,” Liu said.

With three concerts given each year, two of them on “serious” music and the other on “good musical theatre”, the attitude of the students is slowly beginning to change. To inspire them even more, Liu invited his former teacher from Germany, Raphael Alpermann, who is the baroque keyboardist of the Berlin Philharmonic, to come to Schenectady and give a lecture/recital on Bach’s cantatas. Alpermann was so impressed with the choir that he invited them to come to Germany to sing three of Bach’s cantatas for 2020. The students also sang the “O Fortuna” segment from Orff’s “Carmina Burana” during a college fundraising campaign, which really invigorated the choir, Liu said.

Then the trip to Germany was canceled and again in 2021 due to the pandemic. Nguyen returned home from March 2020 to September 2021 and took online classes and kept in touch with Liu.

The choir had always rehearsed twice a week for 75-minute sessions with Max Caplan on piano. These continued but Nguyen missed them all as it was 4am Vietnam time.

Tenor Adam Ginsburg, a senior math/music student, however, managed to do them all.

“I had been in the choir for three and a half years and had been singing in choirs since fourth grade,” he said. ” I really appreciated. But it was a bit disappointing not to go to Germany.

Since last spring, however, Ginsburg has had the chance to dabble in musical theatre, which he said he enjoys, and to get involved in more challenging vocal classical music which has led to the formation of a band of chamber of 15 voices. This ensemble will be presented at the concert on March 20.

When Nguyen returned last fall, she “bounced back”.

“I discovered that I missed the chorus. Professor Liu had been such a support,” Nguyen said. “It’s really intense and stressful at times, but I don’t have any other extracurricular activities that I take part in. . . and I don’t feel too left out.

Last fall, with no trips planned and the choir feeling disappointed due to cancellations, Liu swung into action. She decided that a solo performance at Carnegie Hall, not at a choral festival, would work wonders, she said. Once the college board knew the students were serious, support started pouring in.

The repertoire includes: a selection of Bach’s Cantata 72 and Vivaldi’s “Gloria” for the choir; “The Last Words of David” by Randall Thompson with the Chamber Singers; “Rainbow Connection” with four soloists; and university pianist Samuel Oram and the university string ensemble in a Piano Concerto No. 2 by Bach. The concert will be repeated on March 22 at the New York Avenue Presbyterian Church in Washington, DC.

And the Germany/Czech Republic tour is scheduled for 2023.

Tickets for the Zankel event are $20 through www.carnegiehall.org.

More from The Daily Gazette: