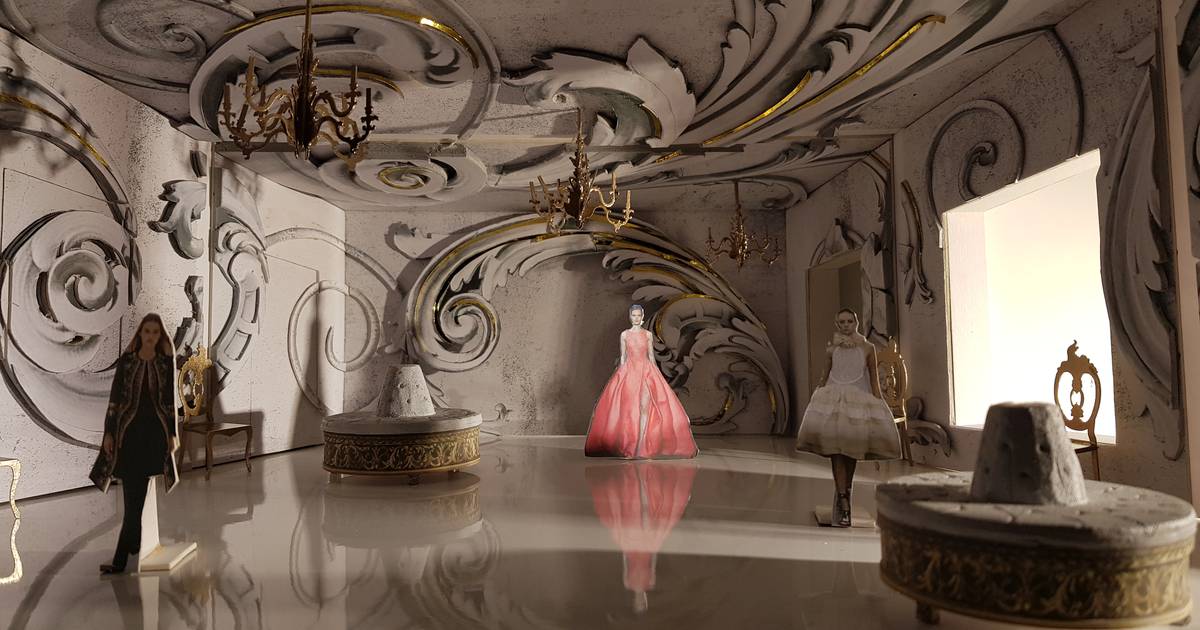 Portadown-born opera maker Gary McCann describes his younger self as having had “this kind of weird interest in classical music”. He was, he told me, “living in a very ordinary place, going to a very ordinary school.” But when I was eight, “I asked my parents to buy me some Wagner tapes. The warning signs were already there, I think.

It was then probably inevitable that once established as a theater designer, he turned to opera. “Around 2005,” he explains, “I made a concerted effort to get into opera, because I felt that my work always had some sort of twist or interest in opera. . People always said it was very lyrical when they saw my sets. So I thought, yes. It’s a medium for me.

His first major operatic work was Die Fledermaus by Johann Strauss at the Oslo National Opera. It was, he says, “very wacky” and “people noticed that”. Since then his career has taken him all over the world, and when we tune in on Zoom he’s in the canteen of Teatro La Fenice in Venice, working on Peter Grimes’ first-ever theatrical production of Britten, having already spent most of the year working in Italy, Florence and Bologna.

I ask him what the difference is between designing for theater and for opera. The first big difference, he says, are the words. “In a theatrical production, the text is king. We are all focused on the intentions of the playwright, the details, the nuances, the subtexts of the writing.

In an opera, he explains, “the lyrics are a bit irrelevant. It can be in Russian, Czech or Italian. It might get quite repetitive. The text itself therefore does not have a huge value. What has tremendous value is the music, and also the visual interpretation of that music, how you manifest that audio world in a visual way.

He feels there is a greater responsibility attached to his role in the opera. “In a play, maybe you focus more on the details of the space, the entrances, the exits, the historical context. In an opera, this is important, but there are many other more important considerations.

The world of opera, he says, “feels less hierarchical than a theatrical context”, speaking primarily of relationships with directors. But, more than once, he draws attention to the fact that his work is anything but a solo race, and that he depends on teams of people physically bringing his ideas to life.

“I’m lucky, he says, in that the people I work with trust me to take those first steps in terms of conceptualizing what production might be like. How do you take a piece of music and translate it into something concrete? How to develop these worlds? I feel that my work is a visual storyteller. I tell the story of opera through images. Pictures and music are the things that stick in people’s memory. It’s not the words. Nobody will go home and think, “Oh, that was a nice turn of phrase” in Verdi’s Simon Boccanegra. They’re going to remember what it was like and they’re going to remember the production that they saw, as some sort of visceral experience.

He then evokes “the stylization of the world of opera. We’re not watching an episode of EastEnders. People don’t walk into the pub and say, ‘Hi, how are you? Would you like a pint of bitters? They sing against each other” – he imbues the word “sing” with a sense of wonder.

“So we’re already in a very strange world, where people express themselves through sound and express their emotions through sound. And we have the extraordinary skills of people who can make those noises. This is not real life. It’s kind of a version of real life and it deals with things – religion, death, sex, all the things that we all go through, or suffer or care about in our lifetime – but they’re communicated in a stylized way. So, as a designer, there has to be a sense of reality that is also a sense of an imaginary world, because the stylization of music and the way people express themselves requires a visual counterpart to that.

I specify that it is not a direct hiring. These are the administrators who are hired by the companies. “That’s absolutely true,” he replies. “The director will always be invited and he will bring his team.” But he says people often invite him over unannounced, “because they will have seen something of me and maybe built a production around my involvement”.

When I ask him about constraints, he talks about “this design soup”. He specifies: “the company I work for, what is their aesthetic, what the manager who hired us to work there wants, the culture of the country in which I work. If I do a project in Germany, it’s going to be very different from doing the same piece in America. I wouldn’t consciously think “I have to do something different”. I would automatically think what they are looking for – it’s the culture, it’s the audience, there’s a different set of expectations there. There are all kinds of considerations. I don’t see myself as having many limits. I see myself as having lots of options and lots of great people to collaborate with.

And he is very aware of the particular circumstances of the opera. “From a budgetary point of view, there are limits. But, you know, I always have six-figure budgets, and sometimes I have seven-figure budgets. So there are serious resources to work with. Sometimes I have to pinch myself. Because as an artist – I consider myself an artist – I have these very large canvases.

Regarding his creations for Tosca, a co-production between the Wrocławska Opera and the Irish National Opera, he says: “I’m always a bit sniffy about Puccini. I still think it’s not my thing. It’s a bit sentimental. And then I work on it and I’m like, ‘This is fucking awesome!’ »

For Tosca, with a tight plot of love, murder and religion in a police state, he chose to update the setting from the early 19th century to the mid-20th century. In the absence of historical costumes, “we see people who look like our parents. Automatically, I find there’s more connection to the narrative by doing that. The 1940s and 1950s are pretty good, because society hadn’t really evolved massively, like it did in the 1960s, let’s say. So we are still in a somewhat old-fashioned moralistic world where women were treated differently than they are today. It’s a useful point of context for the audience to see things in the middle of the 20th century. We can pretty much make the script work in terms of people’s behavior and their relationships. But it feels modern.

With the director Michael Gieleta, he had the idea to present a Rome destroyed by a war. “I thought to myself, what if we had this modernist world, this brutalist architecture, maybe a bit Soviet or a bit like Italian brutalism, Italian rationalist architecture. Which gives us this very slab, monolithic, brutal space. But in this war-torn architectural world, we integrate great fragments of the Baroque era. So we have a large Baroque altarpiece, or a large statue of an angel or a fresco that was recovered from a Baroque palace.

He describes the conflicting styles as being “totally at odds with each other. And in a way, that really sums up for me how the church is portrayed in opera. Puccini portrays the church as a very stern, ruthless, brutal, and wicked organization. You can’t pretend it’s anything but that. So having beautiful pieces of Baroque architecture, with all the detail, filigree and gold leaf, and seeing those abandoned in those severe spaces, for me was the key that unlocked the whole production.

The whole is dominated by a huge cross. “It is 12 or 13 or 14 meters wide and weighs two tons” – he means that literally. “It’s like a giant sword of Damocles hovering over the stage. Again, this paints religion as an oppressive force rather than something that liberates people. He changes position during the opera. “We have this rather high space in the first act, which is the church, and this much more concentrated space for Scarpia’s desk – the crucifix drops two meters – then in the third act it leans down and creates this aggressive perspective for the final fort scene.

The cross, he says, is also “a big acoustic baffle. Much of my work has ceilings. It has hard surfaces. He raked the steps. It has large flat walls. This is to create a more favorable acoustic environment for singers. “I’m not a sound engineer, but I know what works in terms of bouncing sound. And it’s things like that that really help singers. I’ve done it so many times, I kind of do it automatically. Expect that too in McCann’s next show for INO, Richard Strauss’ lavish Der Rosenkavalier, next March.

Puccini’s Tosca is at the Bord Gáis Energy Theater between Monday July 11 and Sunday July 17. www.irishnationalopera.ie